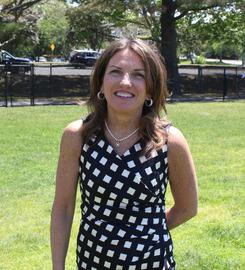 ​          Terry (Greene) Clark is a Boston native.  The daughter of Patrick Greene, an Irish immigrant, and Mary T. Galvin, a first generation American, was raised in Dorchester, Massachusetts along with her three sisters and two brothers. At the early age of five, her family suffered the unexpected passing of her father and she witnessed her mother's struggle to educate her six children.  Despite the loss of her father, her childhood was happy growing up in this working class neighborhood where everyone watched out for one another.   Like all her brothers and sisters, she attended the local Catholic elementary school, St. William’s, and then attended the small, single sex high school, Monsignor Ryan Memorial.  She married her high school sweetheart, Greg Clark,  after she earned her Bachelor of Science in Business Administration from Northeastern University.  She subsequently earned her Masters in Business Administration from the University of Massachusetts while attending night school and working full time for Kraft General Foods.  She was blessed with four healthy children, Aly, Patrick, Victoria and Reece, who became the center of her life.  More recently, she received a certificate in Decorative Arts from Boston Architectural College.

Over the years, she has made time to play a role in the start up and organization of a family business.  An integral part of the community, she has been a soccer coach, Girl Scout leader and a volunteer at numerous school and Boston based non-profit organizations.  She founded and ran a service organization for elementary-aged children for ten years and she, along with her husband, Greg, established a non-profit organization, The Dorchester Foundation. These life experiences nurtured her desire to share her knowledge and experience with others in her first book,Demystifying COLLEGE ADMISSIONS A Parent to Parent Guide to the Reality of the College Process.

For the past several years, Terry has been working as a designer for Alexandra Properties, LLC, a real estate development company.   In January, 2020, she began thinking about writing again.  Inspiration flowed when all of her children returned home in March 2020 as the Covid 19 pandemic spread.  Much of her poetry  stems from the extraordinary in everyday life as well as her family's interactions on the many social issues we all face today.